103 UNITS OF BLOOD DONATED IN MUKTSAR IN PUNJAB 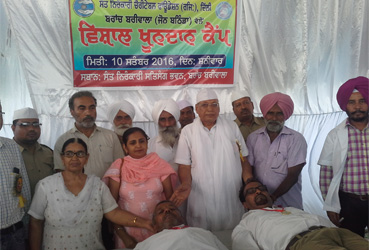 The Sant Nirankari Charitable Foundation organized a blood donation camp at Sant Nirankari Bhawan, Muktsar in Punjab on September 10, 2016, where 103 units of blood were donated by devotees of the Sant Nirankari Mission. The camp was inaugurated by Shri S.P. Duggal, Zonal Incharge Bathinda.

Speaking on the occasion, Shri Duggal said that the Sant Nirankari Mission has been holding blood donation camps across the country since 1986. Besides, several other Social Welfare activities are organized not only in India but abroad also.

103 UNITS OF BLOOD DONATED IN MUKTSAR IN PUNJAB