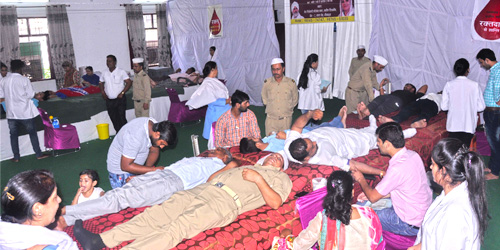 Addressing the donors, Shri Sharma said that blood donation is the highest form to donation. Dr. B S Cheema Zonal Incharge Chandigarh said that these camps organised under the auspices of the Sant Nirankari Charitable Foundation demonstrate the message of Nirankari Baba Hardev Singh Ji that blood should flow in veins and not in drains. He said that this noble act gives satisfaction to the donor and the patient as well.

Besides the President of the Municipal Corporation Shri K S Sohi, other dignitaries of the town as well as Mukhis of the adjoining branches were present. Shri Jaswant Singh Ji, Mukhi Zirakpur thanked the Chief Guest and the other dignitaries as also the donors and organisers. All arrangements were made by Sewadal volunteers led by Shri Raj Kumar, Sanchalak.