201 UNITS OF BLOOD DONATED AT ROPAR IN PUNJAB 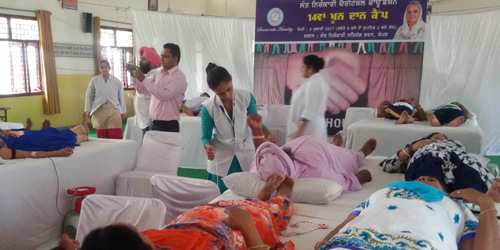 The camp was inaugurated by Additional Deputy Commissioner, Ropar, Shri Amandeep Bansal who said that the site of devotees donating blood voluntarily with such enthusiasm is truly commendable. There is no other donation or charity bigger than this, when this blood will flow in the veins of those who need it. There is no other source for blood than human body, he said.

Speaking on the occasion, Dr. B.S. Cheema, Zonal Incharge, Chandigarh said that besides spiritual awakening, the Sant Nirankari Mission is also contributing selflessly and tirelessly to social welfare. He said that the Mission has been holding blood donation camps throughout the country for the last 3 decades.

Besides Ropar, devotees from Dhnauni, Chamkaur Sahib, Noorpur Bedi, Balsanda and nearby areas also participated in the camp.

201 UNITS OF BLOOD DONATED AT ROPAR IN PUNJAB