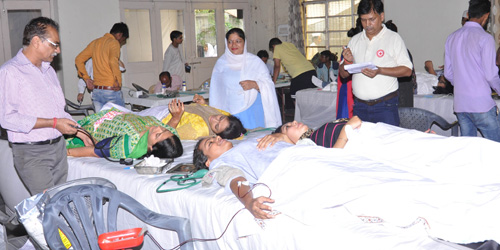 A blood donation camp was organized in Gurgaon on July 17, 2016, where 214 devotees of the Sant Nirankari Mission donated their blood. The blood collecting teams came from Indian Red Cross Society, Delhi and Civil Hospital Gurgaon. Although more than 300 devotees registered themselves to donate blood, but the teams could not oblige them all.

Organized under the auspices of the Sant Nirankari Charitable Foundation, the camp was inaugurated by its Secretary and Secretary Sant Nirankari Mandal from Delhi, Rev C.L. Gulati Ji. Addressing the donors and other members of the Sadh Sangat, he said that for the devotees of the Mission the donation of blood has already become an important part of devotion not only in India but outside also. They are guided by the words of Baba Hardev Singh Ji Maharaj that blood should flow in veins and not in drains. He called upon devotees to continue to serve the community selflessly.

Expressing the vote of thanks, the local Sanyojak and Sector Incharge Shri M.C. Nagpal said that besides holding blood donation camps from time to time, they are maintaining a list of volunteers who donate their blood as and when called upon in case of an emergency.