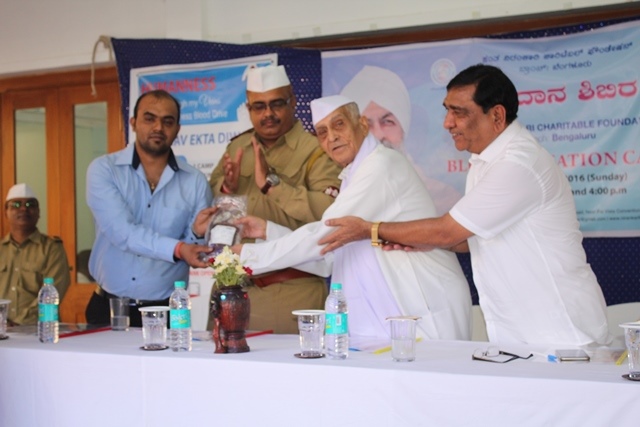 In all, 611 devotees got registered, but only 371 of them including 56 women could qualify and successfully donate their blood. A 23 member blood collecting team came from the Indian Red Cross Society. A certificate of appreciation was presented to the Foundation by Red Cross.

Speaking on the occasion, Shri Dev Raj Bajaj said that starting from the Manav Ekta Diwas on April 24, the Mission organizes blood donation camps across the country throughout the year. Since 1986, he said, the Mission has already organized over 4,500 camps, where more than 7,88,000 units of blood were donated.

Addressing the gathering, Shri Jagdish Lokesh appreciated the contribution of the Mission in this noble cause and said that the blood collected from here will go to the needy patients, particularly the children.

Concluding the event, Shri Sunil Ratra explained the various activities undertaken by the Foundation towards the service of humanity. He thanked the blood collecting team, donors and all other participants for making the camp a success.