838 UNITS OF BLOOD DOANTED IN PUNE ZONE IN MAHARASHTRA 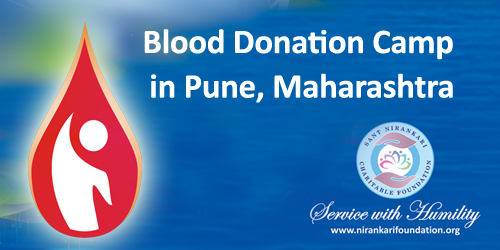 The camp was inaugurated by Shri Dattatraya Dhankawade, Mayor, Pune City. The other Guests of Honour and VIPs of Pune City and many other prominent citizens were also present on the occasion.

The Mayor and all the esteemed guests applauded the efforts of Sant Nirankari Mission and congratulated all the volunteer donors and assured their full co-operation to the Mission for the future events as well.

Rev. Tarachand Karamchandani Ji, Zonal Incharge, along with Rev. Girdharilal Matnani Ji, Sanyojak, Pimpri, highlighted the various social services rendered by the Mission and thanked all the dignitaries present for the noble cause and devotees of the Mission who served selflessly for the cause and also came from different parts of Pune District.

A huge bike rally with 250 to 300 Bikes and 3 four-wheelers was arranged through Pune City on April 23, 2015 from 7 a.m. to 9 a.m. for awareness to people for necessity and importance of blood donation.

Subsequently blood donation camps ware also organized at Nangaon on May 4, Shikrapur on May 24 and Pimpri on June 6, 2015, all in Pune Zone, where a total of 423 units of blood were donated by the devotees of the Mission.