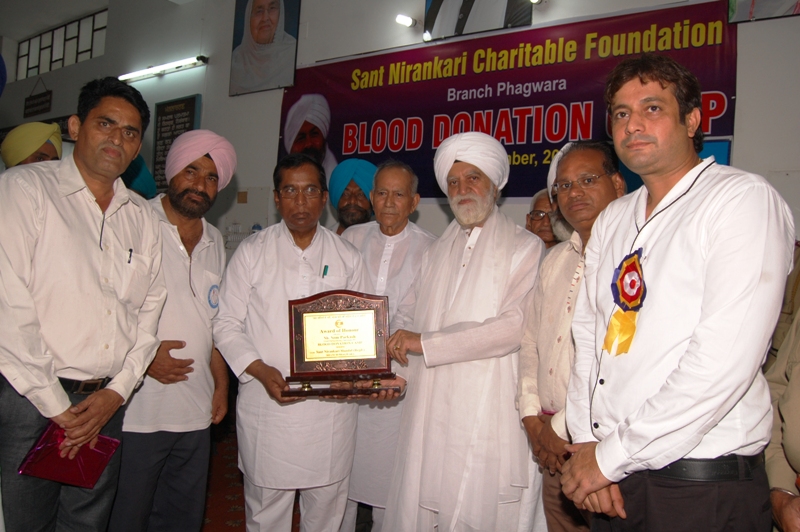 On September 19, 2015, the Sant Nirankari Charitable Foundation organized a blood donation camp at Sant Nirankari Satsang Bhawan, Phagwara in Punjab. Shri Harbhajan Singh Chawla Ji, Zonal Incharge Ludhiana inaugurated the camp. The local MLA and Chief Parliamentary Secretary, Punjab, Shri Som Parkash, Zonal Incharge Chandigarh, Dr. B.S. Cheema and several other dignitaries graced the occasion with their esteemed presence.
During the camp, a total of 334 devotees of the Sant Nirankari Mission, including 105 women donated their blood. The blood collecting teams came from Civil Hospitals Phagwara, Jalandhar and Kapurthala.
Addressing the donors and other participants, Shri Som Parkash appreciated the initiatives of the Foundation in general and the local followers of the Mission in particular for this Selfless Service to humanity. Dr. B.S. Cheema said that Nirankari devotees are always ready to donate blood for the needy because they consider it as a part of their devotion to God. They are, thus, strengthening the feelings of humanity and sharing the sufferings of others. Today modern science has developed artificial limbs for human body but blood has no substitute.
Shri Malkiat Chand, Sanyojak Phagwara thanked all the guests, donors, blood collecting teams and Sadh Sangat and hoped that they would continue to encourage the organizers in future also.
Earlier, on September 17, 2015, the volunteers of the Sant Nirankari Sewa Dal and other devotees of the Mission organized an impressive motor bike rally in the town to create awareness about this noble cause. Shri Som Parkash along with Shri Arun Khosla, Mayor flagged off the rally.