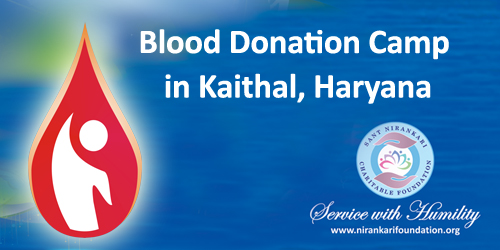 The Sant Nirankari Charitable Foundation organized a District-level blood donation camp in Kaithal in Haryana on June 7, 2015 where 181 units of blood were donated by Nirankari devotees. The blood collecting teams came from the local Civil Hospital and District Red Cross Society.
The camp was inaugurated by Shri Govind Ram Ji Nirankari, Zonal Incharge Tohana. Addressing the donors and other devotees, he said that donating blood is a great service to humanity as the donor gives a new lease of life to the patient. He said that devotees adopt human values in their life and spread the same in the world just like flowers distribute their fragnance.
The camp was preceded by a motor bike rally to create awareness about this noble act of blood donation among citizens. The rally was flagged off by Shri Govind Ram Ji from the local Sant Nirankari Satsang Bhawan. It went round Vishwakarma Chowk, Nanakpura Chowk, Committee Crossing, Pehowa Chowk, MBI Road and concluded back at Satsang Bhawan.