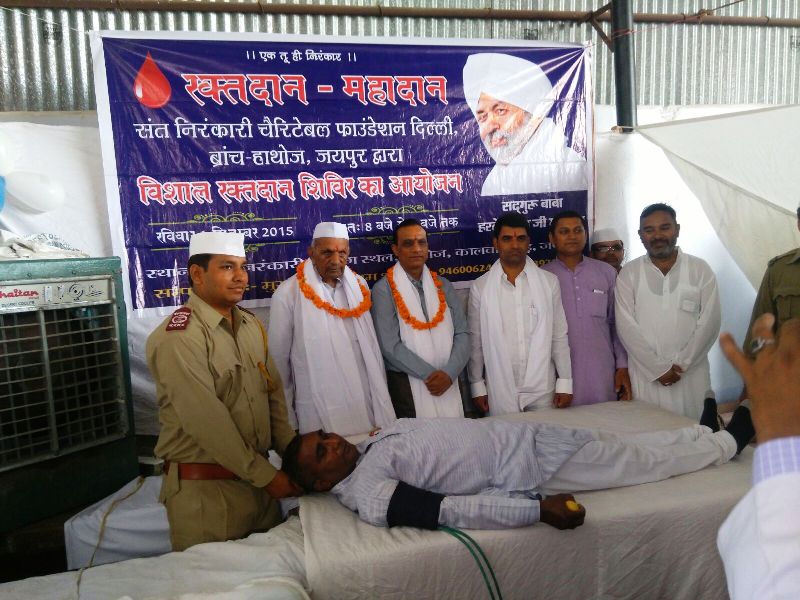 On September 6, 2015, a blood donation camp was organized under the auspices of the Sant Nirankari Charitable Foundation in Hatoj near Jaipur where 130 devotees of the Sant Nirankari Mission donated their blood.The camp was inaugurated by Shri Phool Chand Bajaj Ji, Zonal In-charge while President of the Gram Panchayat Shri Ram Prakash Ji and Mukhi Shri Bhoop Ram Sharma Ji were also present.
Addressing the congregation organized on the occasion, Shri Phool Chand Bajaj said that while the atmosphere is filled by hatred, jealousy, violence and blind faith, it is very difficult to promote the noble cause of blood donation and other human values. Even then, with the blessings of His Holiness Baba Hardev Singh Ji Maharaj, the devotees of the Mission are endeavouring for the same day and night.
Speaking on behalf of the Foundation, its Member Shri Satish Khurana explained the various activities undertaken by it in India and abroad. He said that the Foundation has already emerged as the largest blood donating voluntary organization in the country. Shri Bhoop Ram Sharma thanked all the guests, donors and other devotees as also the volunteers of Sewadal for making the camp a success.