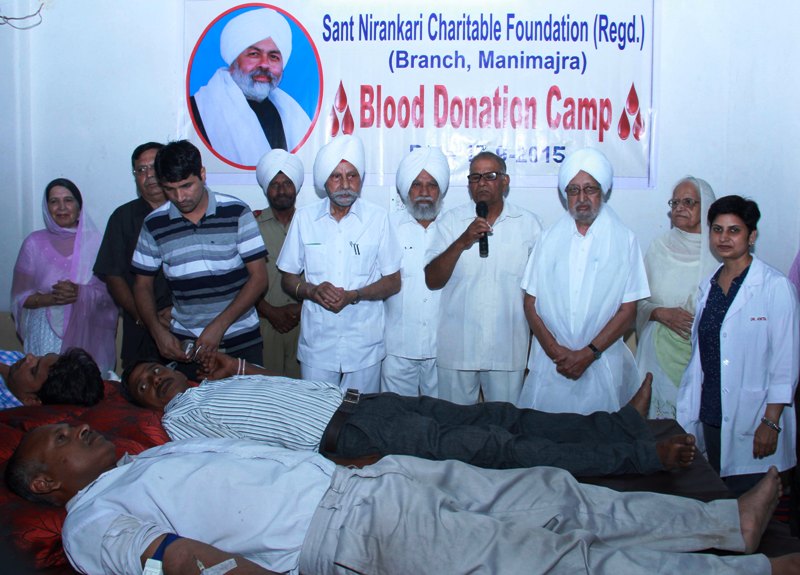 On September 13, 2015, Sant Nirankari Charitable Foundation organized a blood donation camp in Sant Nirankari Satsang Bhawan, Mouli Jagran, Manimajra in Chandigarh. In this camp, a total of 327 volunteers, including 46 women donated their blood.
The camp was inaugurated by Dr. B. S. Cheema, Zonal Incharge Chandigarh. He thanked the volunteers and prayed to Satguru Baba Ji for showering his blessings on them. He said that by donating blood, the donor is definitely giving new life to his fellow human beings. Quoting His Holiness Baba Hardev Singh Ji Maharaj, he added that ‘human blood should flow in veins and not in drains’.

On this occasion, Shri Mohinder Singh, Sanyojak, Sant Nirankari Mandal Chandigarh Branch said, “There is no substitute of human blood, it has to be obtained from human beings only .That is why mass blood donation camps are being held to meet the needs in Chandigarh region’s government hospitals.”

Sant Nirankari Mandal’s local Mukhi Devinder Bhajni Ji said, “By now, as many as 3,400 volunteers of Manimajra Branch have donated blood in 13 camps.”

A 20-member team of doctors and other para-medical staff, led by Dr. Suchet Sehdev, Assistant Professor and Dr. Anita from PGI collected the blood.