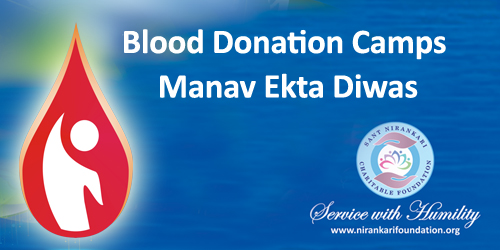 As in the past, the day was marked by a series of blood donation camps. This year the SNCF organized 74 blood donation camps on this single day, including the one in Delhi which was inaugurated by His Holiness Baba Hardev Singh Ji Maharaj where 1470 devotees donated their blood. All these camps were organized under the aegis of the Sant Nirankari Charitable Foundation.
Besides Delhi the Foundation organized 73 blood donation camps in the country including: 11 in Maharashtra; 10 in Uttar Pradesh; 6 in Rajasthan; 5 each in Madhya Pradesh, Punjab and Haryana; 4 each in Gujarat and Himachal Pradesh; 3 each in Jharkhand and Uttarakhand; 2 each in Bihar, West Bengal and Jammu and Kashmir; and one each in Chandigarh, Assam, Sikkim, Andaman, Goa, Chhattisgarh, Odisha, Andhra Pradesh, Karnataka, Kerala and Tamil Nadu.
Blessing the donors in Delhi, Baba Ji said that the devotees are always eager to serve humanity because they realize that real living means living for others. They treat the entire mankind as their own and go on making their contribution towards the welfare of all through blood donation and other activities like cleanliness drive, tree plantation, etc. And such activities are not confined to India; devotees of the Mission in other parts of the world are also equally enthusiastic.
Baba Ji said that while blood circulation is important for body, the circulation of blood from one body to another through blood donation is important for mankind.