Brief Report of Kerala Relief and Rehabilitation Drive by SNCF 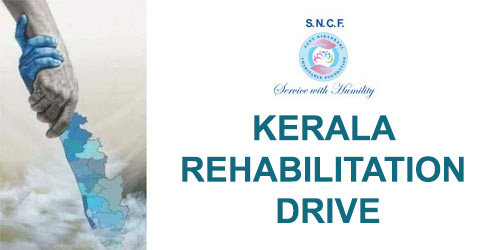 After Kerala was hit by the devastating unprecedented floods, Sant Nirankari Charitable Foundation, with the divine blessing of Her Holiness Satguru Mata Sudiksha Savinder Hardev Ji Maharaj and under the guidance of Rev. Bindiya Chhabra Ji (Executive President) geared itself to leave immediately to provide relief assistance to the flood affected people.

On 24th August, Government and Political officials were contacted and after assessment, reinforcement of 350 skilled professionals joined the SNCF team, from 25th to 27th August, 2018.

On 26th August, the President of a political party, Mr. Raj Gopal ‘Mathu’ Ji advised the team to go to Paravur, one of the worst affected areas. On reaching there, Mr. S. Jayakrishnan ‘Manoj’ Ji (President of Paravur Assembly) along with Mr. Paliyath Krishnabalan and Mr. Ishwar Ji (Advocate and President of Chenamangalam Palium) guided us to work mainly in four villages of Paravur namely Chenamangalam Palium, Chittuttukara, Vadakkara, Puthenvelleykara. Hence, 27th August onwards all required assistance was given in these areas.

There was accumulation of garbage of decaying waste which had resulted in foul smell emanating and impossible for people to live. As this was hazardous hence immediate teams were deployed and tons of garbage was disposed off at the MRFC dumping yard and countless streets were cleaned. Simultaneously the area was disinfected.

To provide safe and clean drinking water, 107 wells and 52 water tanks were cleaned in 6 days in Chiranallur, Rose Nagar, Aluwa, Paravur, Kunnukera. Due to paucity of cleaning drinking water, 700 residents were given clean bottled drinking water.

Skilled teams worked relentlessly covering electrical repairs to over 200 houses, manual work in 158 houses, plumbing job in 80 houses, masonary jobs in 25 houses and carpentry related work in 80 households. Some major repair work in these places included extensive floor repair in Chiranallur where the whole floor was washed away in the flood. In Aluwa walls were washed away by the floods so those walls were reinstated. As advised by Mr. Jolly (ward incharge of Chiranallur South), Anganwadis centers, along with government dispensaries and hospitals were also cleaned and repaired in areas of Chiranallur, Paravur, Aluwa and Kunnukera. In Kannukera a Primary Government School was cleaned and repaired so that it could resume working.

Places of worship like Local Palium Shiv Temples and St. Francis Xavier’s New Church in Kunnukera were cleaned extensively by the volunteers.

On medical front as advised by expert doctors numerous prescriptive medications were given to more than 750 residents. These medication included anti-allergies, anti-biotics, anti-septics, anti-pyretics and analgesics. Sanitary napkins for women and diapers for babies were given as per their requirement.

At Aluwa a bridge was rebuilt which was crucial for the villages to commute. This bridge was henceforth called ‘Bridge of Humanity’.

On the public request of the residents, a special repair team was assembled from Bangalore by SNCF which worked specifically on Televisions, Washing machines, Refrigerator, Fans, Electrical motors and other expensive electrical appliances. This team went over individually to more than 50 houses and fixed all the necessary equipment.

Amid devastation and deluge SNCF volunteers and Sewadal worked with great heroism, unrelenting spirit of compassion and selfless sewa, exhibiting our missions’ tenets.

SNCF will continue rendering these services in Kerala and the upcoming teams of volunteers will be from Vadodra and Ahmadabad.

The selfless efforts of SNCF and Sewa Dal were recognized and hailed by residents, government official and media. 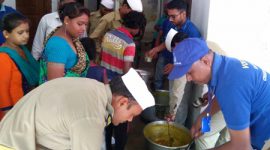 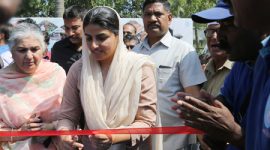 Join us in Serving Humanity in Kerala 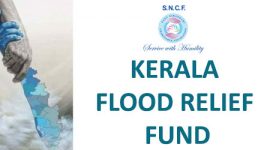 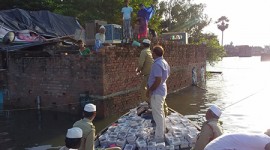 RELIEF TO FLOOD AFFECTED PEOPLE IN ALLAHABAD AND VARANASI