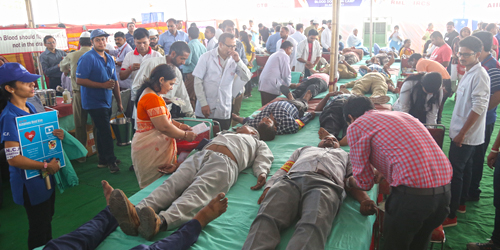 Delhi, April 24, 2017: The Sant Nirankari Charitable Foundation organized 76 Blood Donation Camps pan India under Humanness Blood Drive with a total collection of 18593 units. Out of which 12 camps were organized on 23rd April, 2017 and 64 camps were organized on 24th April, 2017. The major stations where these camps were organized were 11 in Utter Pradesh and 11 in Maharashtra, 6 in Rajasthan, 5 each in Punjab, Haryana and Madhya Pradesh, 4 each in Himachal Pradesh, Gujrat and Bihar, 3 each in Uttrakhand, West Bengal and Jharkhand, 2 in Jammu and Kashmir, and one each in Chandigarh, Chhattisgarh Goa, Assam, Odisha, Telangana, Karnataka, Kerala Tamil Nadu and Andhra Pradesh.

The main Blood Donation Camp in Delhi was inaugurated by Nirankari Satguru Mata Savinder Hardev Ji Maharaj with a call to humanity to make blood relation through blood donation. These blood donation camps coincide with the Manav Ekta Divas celebrated by Sant Nirankari Mission to commemorate the supreme sacrifice of Baba Gurbachan Singh Ji who laid down his life on this day in 1980 while crusading for truth, love, peace and unity in the world. Tributes are also paid by the Mission to hundreds of devotees who too sacrificed their lives for this noble cause.

Such Blood Donation Camps are being arranged by the Sant Nirankari Charitable Foundation around the year.