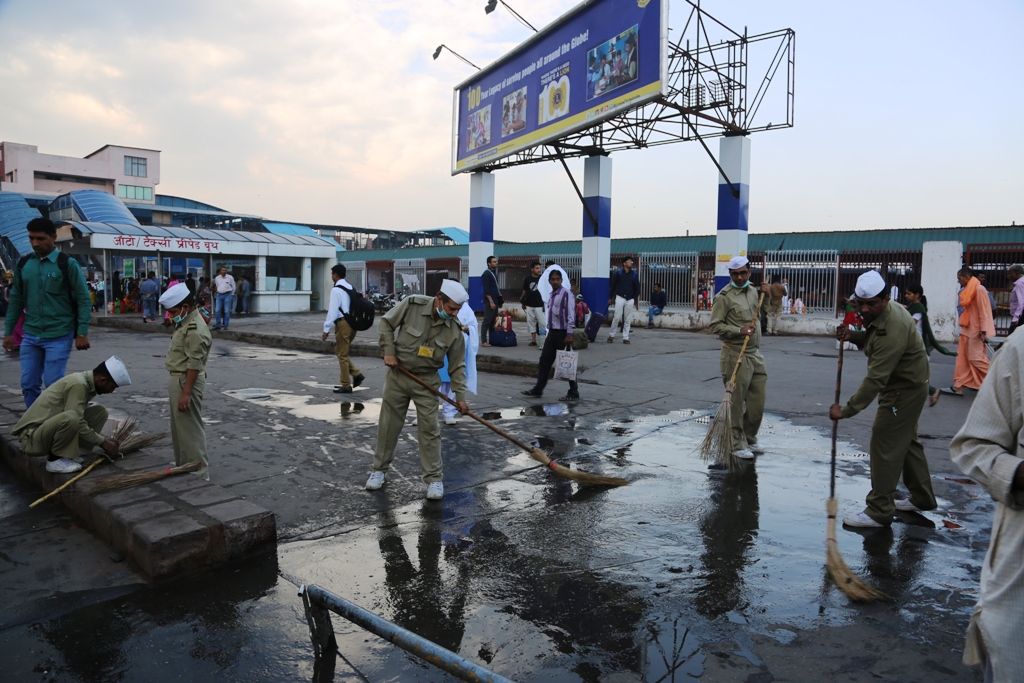 On March 12, 2016,more than 20,000 devotees of the Sant Nirankari Mission cleaned 46 Railway Stations across the country today under the auspices of the Sant Nirankari Charitable Foundation. Started under the ‘Swachh Rail – Swachh Bharat Abhiyan’ on October 2, 2015, the cleanliness drive has been once in every month, today being its sixth phase.In Delhi, the drive was conducted at Delhi Main, New Delhi and Nizamuddin Railway stations where more than 2000 volunteers participated. They cleaned all the platforms, foot over-bridges, poles and walls, drinking water points as well as the toilets.Shri Parvesh Verma, Member of Parliament, who visited New Delhi Railway Station said that the Sant Nirankari Mission, particularly the youth are making a significant contribution to the Swachh Bharat Abhiyan pioneered by the Hon’ble Prime Minister of India. Appreciating the quality of the work, he said that the day does not seem to be far when our cities will also have a look like Singapore, London and other world class towns. Motivated by the spirit of devotion and dedication on the part of Nirankari youth, he said that he felt like working for the welfare of mankind round the clock.Shri Verma said that Baba Hardev Singh Ji Maharaj has rightly called for the removal of pollution both from the mind and outside.While going round, Shri Verma spent some time to see a street corner play (Nukkar Natika) being presented by devotees of the Mission and witnessed by passengers. He appreciated the message of the play to motivate people to keep their surroundings clean and free from pollution.

Today’s campaign showed that even though the drive has continued for the last six months, the volunteers participated with the same enthusiasm. In fact, many volunteers who did not get a chance earlier, came forward to participate in the drive today.It may be recalled that the Hon’ble Railway Minister wrote to His Holiness Baba Hardev Singh Ji Maharaj for participation in the ‘Swachh Rail – Swachh Bharat Abhiyan’ on October 2, 2015. With the blessings of His Holiness, the Sant Nirankari Charitable Foundation, however, selected 46 main Railway Stations across the country for cleanliness not only on October 2 but once in every month for one year thereafter also.