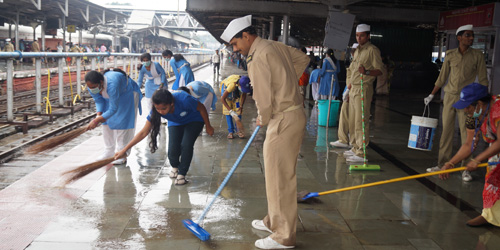 This marked the 12th and the final phase of the cleanliness drive the Foundation decided to carry out from October 2 last year once every month. The decision came with the blessings of His Holiness Baba Hardev Singh Ji Maharaj who had received a letter from the Hon’ble Railway Minister, Shri Suresh Prabhu for the Mission’s participation in the ‘Swachh Rail – Swachh Bharat Abhiyan’ on that day.

In Delhi, as in the past 11 phases, the Sant Nirankari Charitable Foundation carried out the cleanliness drive at Delhi Main, New Delhi and Hazrat Nizamuddin Railway Stations. In all, more than 30,000 volunteers participated. They cleaned not only the platforms but foot over-bridges, pillars, walls, water points, toilets and the parking lots.

In Banda, Uttar Pradesh also the drive was conducted under the auspices of the Sant Nirankari Charitable Foundation. More than 300 volunteers as also the Sewadal members cleaned the Railway Station and motivated the passengers and others towards cleanliness of not only the Railway Station but their own surroundings also.

Earlier, the devotees organized a motor bike rally to motivate people to participate in the ‘Swachh Rail – Swachh Bharat Abhiyan’. They also gave the message of love and peace preached by the Mission.

The Rishikesh branch of the Sant Nirankari Mission cleaned three Railway Stations – Rishikesh, Raiwala and Virbhadra, all for the first time. They cleaned the platforms with water and dusters, as also the surroundings. They remove the garbage also.

The drive was followed by the congregation at the Sant Nirankari Satsang Bhawan Rishikesh.

Conducted under the auspices of the Sant Nirankari Charitable Foundation, the drive succeeded to clean all the platforms, the circulating area, waiting hall, ticket counters, walls and pillars. The volunteers took special care to remove stains from the walls and pillars.

Shri Dinesh Tripathi CCM and other Senior Railway Officials were present to encourage the participants.

In Jaipur, thousands of volunteers of the Sant Nirankari Charitable Foundation and Sewadal Members participated in the cleanliness drive at Jaipur Junction, Gandhi Nagar, Durgapura and Jagatpura Railway Stations. A large number of other devotees also joined them.

More than 100 children presented skits (Nukkar-Natak) at different places to create awareness about cleanliness not only at the Railway Stations but their surroundings also.

From Railways, Shri Sanjeev Agarwal DMO, Shri Imtiaz, Health Manager and Shri Lakshmi Narayan DCM were present for coordination. They expressed their appreciation for SNCF volunteers for their zeal, persistence, dedication and selfless service to the society. They also mentioned that the enthusiasm of all the participants remained constant throughout the drive.

Rev Sunil Ratra Ji, Zonal Incharge Karnataka, thanked the Railway Authorities for their support and cooperation and appreciated the effort of volunteers by emphasizing the need and importance of selfless service and positive contribution to society.

A massive cleanliness drive was organized at Jabalpur Railway Station on Sunday, October 2, 2016 by the Sant Nirankari Charitable Foundation with more than 400 of its volunteers participating in the same. Being Gandhi Jayanti, 75 Scouts and Guides also joined the campaign.

The West Central Railway General Manager, Shri Girish Pillai who visited the Station, appreciated the move initiated by the Foundation and hoped that it would be continued in future also. He said that to attain optimal cleanliness, public participation is obligatory. He appealed to the gathering to extend their cooperation by keeping the Railway Stations and their own surroundings clean.

A street play was staged by the volunteers of the Foundation to create awareness among people to ensure adequate cleanliness. The performance was appreciated by Railway Officers and employees and large number of people present on the occasion.

With the blessings of Her Holiness Satguru Mata Savinder Hardev Ji Maharaj, the Sant Nirankari Charitable Foundation carried out the last phase of their ‘Swachh Rail – Swachh Bharat Abhiyan’ started on October 2, 2015 at Surat Railway Station. About 600 volunteers of the Foundation, Sewa Dal members and other devotees carried out the drive under the guidance of Shri Onkar Singh Ji, Zonal Incharge and Shri Shaileshbhai Solanki, Kshetriya Sanchalak.

Addressing the participants, Shri A.K. Verma, Station Superintendent congratulated the volunteers for their selfless contribution to the Nation and the society.