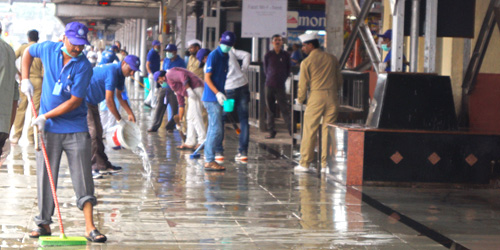 The Sant Nirankari Charitable Foundation carried out the 11th phase of the ‘Swachh Bharat – Swachh Rail Abhiyan’ on September 10, 2016. Thousands of volunteers from the Foundation as also the Sewadal members, including women cleaned 46 main railway stations across the country.

It may be recalled that the campaign was undertaken by the Foundation with the blessings of Nirankari Baba Hardev Singh Ji Maharaj on October 2, 2015 with a pledge to carry out the same not only on October 2, but once every month for 1 year. The last phase of the year will be conducted on October 2, 2016.

In Delhi, more than 2,000 volunteers worked from 8.00 am to 12.00 Noon to clean the Delhi Main Station, New Delhi and Nizamuddin. Apart from Delhi the following reports have been received:-

More than 1200 volunteers of the Sant Nirankari Charitable Foundation dressed in blue t-shirts and blue caps along with Sant Nirankari Sewadal men and women cleaned all the platforms, foot over bridges, parcel office, the yard and the surroundings. Some volunteers went round and talked to passengers, porters, vendors and auto-rickshaw and taxi drivers on the importance of keeping the station and the surroundings clean.

The campaign was formally inaugurated by Shri K.S. Patil, Sr. DCM, Central Railways, Pune Division in the presence of Shri Sanjay Kumar, ACM, Shri A.K. Pathak, Station Manager and other Railway Officers. Shri Patil said that what we need is the change in the behaviour of the passengers so that they realize the importance of cleanliness of railway stations. He thanked the Sant Nirankari Mission in general and the Sant Nirankari Charitable Foundation in particular for such a big contribution in this noble cause.

Shri Tarachand Karamchandani Ji, Zonal Incharge Sant Nirankari Mandal Pune thanked the Chief Guest and other dignitaries for encouraging the participants. He also thanked the volunteers who came forward every month with no let-up in their enthusiasm.

Volunteers of the Sant Nirankari Charitable Foundation and Sewadal members cleaned the Baypanahalli Railway Station in Bangalore, working from 8:00 am to 12:45 pm. They cleaned not only the platforms, foot over-bridges, stairs and corridors but also the surroundings. They also cleaned the Metro Station.

On a special request from Shri Ravindernath, Sr. Station Manager, the volunteers also planted 120 saplings in the railway compound.

Shri Chandra Shekhar, Chief Reservation Supervisor who was present with other Senior Officers said that the effort of the volunteers was much more than he expected. He appreciated their selflessness as also the spirit of devotion and dedication.

More than 500 men and women from Patna and adjoining branches of Danapur, Khagaul, Hajipur, Deedarganj, Jehanabad and Bihta cleaned the Railway Station at Patna from 8:00 am to 12:00 Noon.

Assembled under the auspices of the Sant Nirankari Charitable Foundation, they cleaned all the platforms foot over bridges and circulating area. Shri Naval Kishore Singh, Kshetriya Sanchalak, Patna guided the operation.

Speaking on the occasion, Shri N.K.P. Verma, Zonal Incharge, Patna said that the service to humanity has always been an important mode of devotion to God. The Mission’s devotees, therefore, are always prepared to serve with body, mind and material selflessly for the welfare of humanity not only within the Mission but outside also, whatever the forum. This cleanliness drive which is being organized by Sant Nirankari Charitable Foundation across the country, in particular is setting an example of discipline, devotion and dedication for other to follow.

Shri S.P. Singh, Zonal Incharge, Barauni was also present on the site to encourage the volunteers.

In Mumbai, more than 2,500 volunteers cleaned the 3 main Railway Stations – Mumbai Central, Dadar and Chhatrapati Shivaji Terminus. Starting at 8:00 am, they took up the activity in teams and completed the same by cleaning the platforms, ticket counters, waiting areas, parking lots, etc. by 12:00 Noon.

In Varanasi, more than 550 volunteers from the Sant Nirankari Charitable Foundation and the Sewadal worked from 7:00 am to 11:00 am and cleaned the entire Railway Station and its surroundings. They worked in 4 groups to complete the task.

Addressing the volunteers Shri Pandey described the contribution of the Sant Nirankari Mission towards ‘Swachh Bharat – Swachh Rail Abhiyan’ as unique and thanked the Foundation for carrying out the drive at the Railway Station with such a spirit of devotion and dedication.

Speaking on the occasion, Shri Ramashankar Shukla, Zonal Incharge Varanasi said that the cleanliness of surroundings is very essential for people’s health. Every citizen should participate in this noble effort.

In Mathura, more than 450 devotees of the Sant Nirankari Mission including volunteers from the Sant Nirankari Charitable Foundation and Sewadal members cleaned all the platforms, foot over bridges, poles and walls and waiting areas, etc. with great spirit of devotion and dedication.

Inaugurating the operation, Shri Pradeep Mathur, MLA said that this is an important service of humanity for which every volunteer needs to be guided by the spirit of humility and self-sacrifice. He congratulated the Foundation for this noble contribution.

Geetanjali Sharma, a well-known Kathak dancer, who came with her Guru Uma Dogra Ji actively participated in the campaign. She said that Mathura, the city of Lord Krishna should distinguish itself for cleanliness also.

Shri D.K. Singh, Registrar High Court and the State Information Commissioner of Uttar Pradesh Shri Arvind Singh Vishth also encouraged the volunteers with their esteemed presence. Several Senior Railway Officers were also present. They all appreciated the spirit of enthusiasm of the participants.

Shri Surjit Singh ‘Nashila’ Ji, a well-known poet of the Mission from Delhi also blessed the volunteers and said that Brahm Gyan makes the devotee so generous that he or she is always ready to serve the community. Shri Harvinder Kumar Arora, Sanyojak Mathura said that the Nirankari devotees do not work for the cleanliness outside only, but make every effort to remove the pollution of hatred from the mind also.