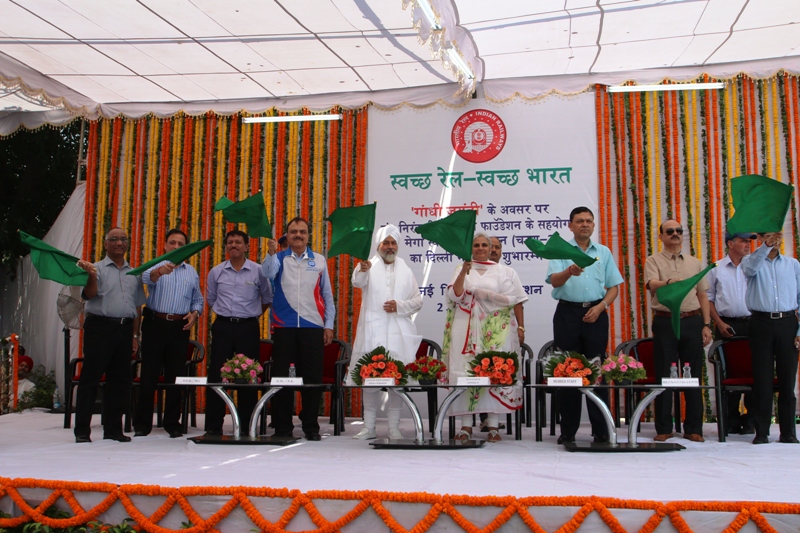 The Sant Nirankari Charitable Foundation has carried out a year-long Cleanliness Drive at 46 main Railway Stations across the country, beginning from October 2, 2015. The series will conclude on October 2, 2016.

The campaign was undertaken with the blessings of His Holiness Baba Hardev Singh Ji Maharaj following a letter Baba Ji received from the Hon’ble Railway Minister, Shri Suresh Prabhu who had requested for the participation of the Mission in the ‘Swachh Rail – Swachh Bharat Abhiyan’ on October 2 only. The Foundation, however, selected 46 Railway Stations to be cleaned not only on October 2, but once in every month for 1 year.

Ever since, the Foundation has been carrying out the drive at all these Railway Stations with active participation of the Sant Nirankari Sewadal and Volunteers. The greatest feature of the drive was that there was no let-up in the enthusiasm of the volunteers throughout the year. They took it as a means to express their devotion to God through the service of humanity. They used skits (Nukkar-Natak) and special interviews to create awareness among passengers and other people usually visiting Railway Stations, about cleanliness of not only the Railway Stations but their own surroundings also.

Railway Authorities described the Foundation as their biggest partner in the ‘Swachh Rail – Swachh Bharat Abhiyan’. Their Senior Officers were present to encourage the volunteers at every Railway Station every month.

In all more than 20,000 volunteers participated in the campaign every month with the strength varying from station to station. It is estimated that they put in 9, 59,982 man-hours for this noble cause in first 10 months. The equipment and material like soap, surf and dusters etc. was provided by the Foundation and the volunteers cleaned the stations just like their own houses. They cleaned not only the platforms but foot over bridges, pillars, walls, water points, toilets and the parking lots. They impressed every passenger with their spirit of devotion and discipline.