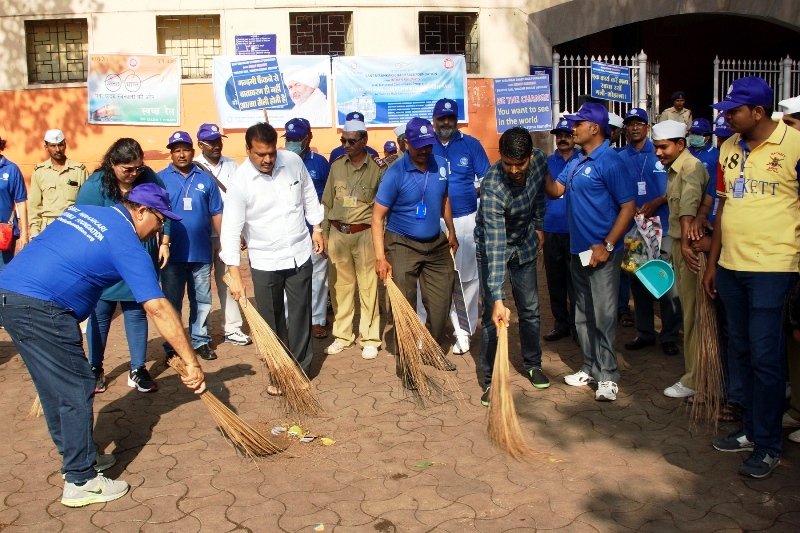 Reiterating the phrase “Cleanliness is next to Godliness” and to endorse the commitment towards the noble objective of the Swachh Rail – Swachh Bharat Abhiyan initiated by the Hon’ble Minister for Railways, Shri Suresh Prabhu, the Sant Nirankari Charitable Foundation observed the cleanliness drive at the Pune Railway Station on the 2nd of October, 2015. The entire station complex was marked with more than 400 volunteers of the Foundation, dressed in blue T-shirts and caps who under the supervision of the cleanliness staff of the station broomed and mopped the parking places, platforms, foot over bridges, parcel office and the Pune Yard.
A team of 12-15 volunteers staged street play at various locations to spread awareness on the importance of keeping the surroundings clean. Volunteers in teams of 4 to 5 were seen speaking to passengers, porters, vendors, auto rickshaw and taxi drivers on the importance of health and hygiene within the station premises. Lessons of Gandhi Ji were taught and the persons found littering and spitting were handed roses to remind them of their unhygienic habits.
The drive was formally inaugurated by ADRM-Central Railway, Pune Division, Shri Milind Devaskar in the presence of Sr. DCM-Central Railways, Shri Gaurav Jha and prominent members from the Sant Nirankari Charitable Foundation. Shri Milind Devaskar expressed deep concern on the importance of cleanliness and wished that such drives may eventually result in bringing a behavioural change in the passengers. The campaign was also graced by their presence by Shri Dilip Kamble, Minister for Social Welfare, Maharashtra, Shri B.K. Dadabhoy, DRM, Central Railway, Pune Division, Smt. Madhuri Misal, MLA and Mayor Shri Dattatreya Dhankawde.
The drive concluded with an address by Shri Girish Bapat, Care Taker Minister for Pune. Rev Tarachand Karamchandani Ji, Zonal Incharge, Pune thanked all those who participated in this campaign. He mentioned that on the request of the Hon’ble Railway Minister Shri Suresh Prabhu addressed to Baba Hardev Singh Ji Maharaj, the Foundation has to adopted 45 railway stations across India where cleanliness drive will not only be conducted on 2nd October but once in a month for one year thereafter also .