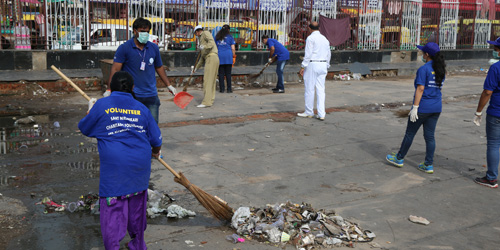 Reiterating the phrase “Cleanliness is next to Godliness” and to endorse the commitment towards the noble objective of the ‘Swachh Rail – Swachh Bahrat Abhiyan,’ initiated with the blessings of Baba Hardev Singh Ji Maharaj the Sant Nirankari Charitable Foundation carried a Cleanliness drive on of August, 13, 2016 at 46 main Railway Stations across the country as the 10th phase in the series initiated on October 2, last year, which is a part of an year – long cleanliness exercise on once every month basis.

More than 20,000 devotees of the Sant Nirankari Mission including volunteers of the Foundation and Sant Nirankari Sewadal have been participating in the campaign with full enthusiasm, devotion and dedication. Railway Authorities describe the Mission as their most important partner in the drive.

At Pune in Maharastra, the entire station was marked with the presence of more than 1200 volunteers of the Foundation dressed in blue T – shirts and blue caps along with Sant Nirankari Sewadal who under the guidance of the cleanliness staff of the station performed the ardent task of cleaning every nook and corner of the area, parking lots, platforms, foot over bridges, parcel office and the Yard.

Two teams of 10 – 12 volunteers sang Swachh Bharat song at the station’s entrance to spread awareness about the importance of cleanliness. Volunteers in teams of 4 to 5 went around engaging various stakeholders including passengers, porters, vendors, auto rickshaw and taxi drivers on the importance of health and hygiene within the station premises. In their conversation, the team asked these stake holders to take an oath to keep the station and the surroundings clean. They also acknowledged suggestions from the commuters to enhance the level of cleanliness in the station premises.

The drive was formally inaugurated by Shri. Milind Deuskar, ADRM, Central Railways, Pune Division, in the presence of Shri Gaurav Jha, Sr. DCM, Shri Madan Lal Meena, DCM, Shri A K Pathak, Station Manager along with dignitaries from Sant Nirankari Mission. Shri Milind Deuskar expressed deep concern on the importance of cleanliness and wished that such drives would eventually result in bringing a behavioural change in the passengers. He asked the volunteers to render their services till we are able to change the behaviour of every passenger.

The drive concluded with an address by Rev. Tarachand Karamchandani Ji Zonal Incharge, who thanked all those who participated in this campaign and applauded the Foundation for its efforts to observe such activities of social importance. He thanked the authorities from the Pune Division of Central Railways in making this drive a huge success.

Ernakulam (Kerala) : Volunteers of the Sant Nirankari Sewadal and Sant Nirankari Charitable Foundation landed armed with the cleaning equipment and moved up to Ernakulam Junction Railway Station to clean and maintain the area they had earlier cleaned on several occasions as a part of ‘Swacch Rail – Swacch Bharat Abhiyan.’ This was the 10th phase of monthly series that started on October 2, 2015.

Notably, there was no let – up in the enthusiasm with which the cleaning up operation was taken up. Guided by the teachings of Oneness and Human Values by the Sant Nirankari Mission, the devotees serve the society by treating all citizens as members of one big family and contribute their mite to their welfare.

The venue at Ernakulam Railway Station was visited by Dr. Rajesh Chandran, South Railway Area Manager and Dr. Kunjunjamma George, Addl. Chief Medical Supdt. Railway Health Department. This selfless service performed by the Mission was praised by all the passengers and railway staff who were present at the Station.

Carried out just two days before the Independence Day, the Cleanliness drive attained spacial significance and served as an important occasion to create awareness among railway passengers about the importance of keeping the surroundings clean not only at Railway Stations but at home also.

Agra: At Agra Cantt. Railway Station, about 2000 volunteers of the Sant Nirankari Charitable Foundation and Members of Sewadal carried out the cleanliness drive under the guidance of Smt. Kanta Mahendru Ji, Zonal Incharge and Sewadal Kshetriya Sanchalak, Shri Mahesh Chauhan.

The volunteers cleaned every nook and corner of the Station, covering all the platforms, foot over bridges, water stands, office complex and parking area. Special attention was paid to remove the garbage. The floors were cleaned with soap and dried with dusters.

Dehradun: At Dehradun, the State Capital of Uttarakhand, the drive was carried out by volunteers of the Sant Nirankari Mission with the same enthusiasm as they showed in the past. It was inaugurated by Shri Kalam Singh Rawat Ji, Sanyojak.

The volunteers cleaned all the main areas including platforms, office complex, walls, foot over bridges and the parking area. They also spoke to passengers about cleanliness and the Mission.

Haridwar: Hundreds of devotees of the Sant Nirankari Mission joined the cleanliness drive at Haridwar Railway Station. Guided by Shri Suresh Chawla Ji, Sanyojak and Shri Suresh Kanauja Ji, Kshetriya Sanchalak Sewadal, the volunteers cleaned all the platforms, foot over bridge, office complex and parking area. They put the garbage in dustbins and encouraged the passengers also to do the same. They also advised them against the use of polythenes.