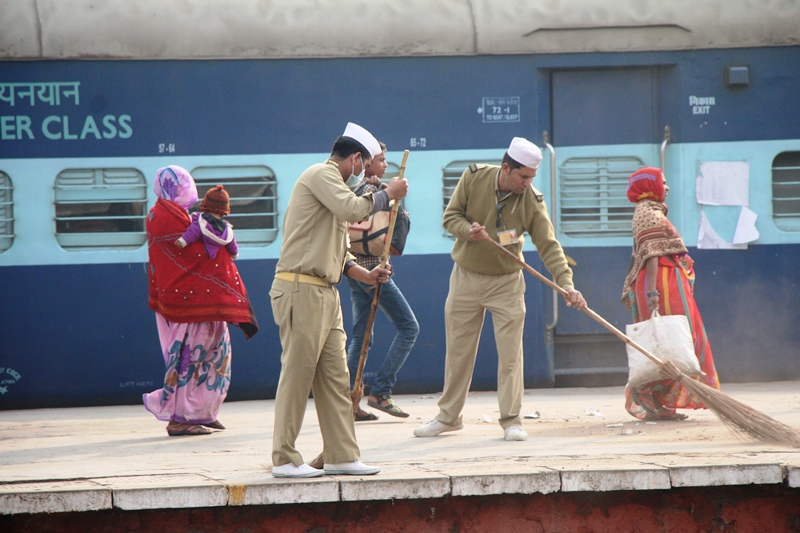 On February 13, 2016, thousands of devotees of the Sant Nirankari Mission cleaned 46 Railway Stations across the country under the auspices of the Sant Nirankari Charitable Foundation. Started under the ‘Swachh Rail – Swachh Bharat Abhiyan’ on October 2, 2015, the cleanliness drive has been repeated every month. This was the fifth phase.
In Delhi, the drive was conducted at Delhi Main, New Delhi and Nizamuddin Railway stations where more than 2000 volunteers participated. They cleaned all the platforms, foot over-bridges, poles and walls, drinking water points as well as the toilets.
Dr. Sanjeev Kumar IAS, Secretary to the Hon’ble Railway Minister, Shri Suresh Prabhu visited New Delhi Railway Station and encouraged the volunteers. He was welcomed with bouquets by Shri C.L. Gulati, Secretary, Sant Nirankari Mandal and the Foundation, and Shri P.S. Ahluwalia, Member, Central Planning and Advisory Board.
After going round the various platforms of the Station. Dr. Sanjeev Kumar said that in ‘Swachh Rail – Swachh Bharat Abhiyan’ the participation of the Foundation and its volunteers has been 80 to 90 percent of the total. He said that everybody toils for self, but these volunteers serve the community selflessly and with a spirit of devotion and dedication. He appreciated the quality of their contribution.Dr. Sanjeev Kumar said that volunteers of the Foundation are serving as a great source of inspiration for the passengers towards the importance of cleanliness. He hoped that the time is not very far when the entire population of the country will realize the importance of keeping their surroundings clean and the name of the Foundation among those who create such an atmosphere will be mentioned on the top. He expressed the hope that this cooperation between Railways and the Foundation will continue.
Speaking on the occasion, Shri C.L. Gulati, said that service to community has been a prominent activity of the Sant Nirankari Mission, even though spiritual enlightenment always remained its primary commitment. In 2010, the Foundation was established to have a better focus on this aspect. Today, the Foundation is not only carrying out the cleanliness and tree plantation drives but also organizing blood donation camps in a big way. Moreover, every effort is made to provide relief and rehabilitation measures during natural calamities.
It may be recalled that the Hon’ble Railway Minister wrote to His Holiness Baba Hardev Singh Ji Maharaj for participation in the ‘Swachh Rail – Swachh Bharat Abhiyan’ on October 2, 2015. With the blessings of His Holiness, the Sant Nirankari Charitable Foundation, however, selected 46 main Railway Stations across the country for cleanliness not only on October 2 but once in every month for one year thereafter also.